Filing – or even considering filing – a lawsuit can be stressful, for any number of reasons.  The unknown parts of the process can be disconcerting.  The underlying injuries, or loss of employment, can cause serious stress to a family.  The prospect of putting your personal situation “out there” is enough to make most people feel relatively uncomfortable.

When someone contacts us to discuss a possible lawsuit, we take these concerns into account.  We've represented hundreds of clients over the years, so we know what concerns are common.

And another common concern is the “public” nature of a lawsuit.  So, let's clear up what is, and is not, public when someone files a lawsuit.  It is important to understand that a lawsuit is not always the best option, but that's a topic for another article.

First, in our world – dealing with lawsuits for serious injuries, medical errors and illegal employment actions – there are two primary places where a lawsuit would be filed: State Court and Federal Court.  We'll look at each of these separately.

The vast majority of lawsuits involving claims for serious personal injuries and medical errors are filed in State court.  This means that the case is filed in what is known as “Supreme Court” (which is actually the lower level trial court in New York).  Supreme court cases are filed in a county where either the accident or injury occurred, or where one of the parties resides – which is often the same place.

The documents that formally commence a lawsuit are known as the Summons and Complaint.  These are drafted by the attorney for the plaintiff, or the injured party.

The Summons and Complaint serve to identify the parties to the lawsuit, their respective addresses, and go on to identify the relevant facts that give rise to the claim.  For example, if John was hit by a car being driven by Stan, the case would be John v. Stan.  The complaint would then go on to discuss when Stan hit John, where the accident occurred, and, generally, what John alleges Stan did wrong and how John was injured as a result.

The Summons and Complaint are filed in the office of the county clerk for the county where the case is commenced, and they are a matter of public record.   In other words, anyone who really wanted to find a copy could do so with a bit of leg work.  Many, but not all, counties in New York now maintain online public records databases, which makes these documents available online.

In State court, the vast majority of other documents are not filed with the county clerk, and are therefore not part of the public record.   These include the Bill of Particulars (which outlines the plaintiff's injuries in much greater detail), medical records, witness lists, letters between attorneys and, for the most part, documents outlining the terms of a settlement.  This means that often the “public” version of a lawsuit includes only the initiating papers, some miscellaneous documents generated during the lawsuit, and the papers ending the lawsuit (in the case of a settlement, this is known as a Stipulation of Discontinuance).

In terms of the public nature of personal injury lawsuits, the short answer is that while the filing itself is a matter of public record, much of the information that would prompt concerns over privacy – including medical records, income information and settlement terms – typically (although not always) remains out of the public sphere.

Unlike claims for serious personal injuries or medical errors, lawsuits arising out of employment discrimination, sexual harassment, FMLA, etc. are most often commenced in Federal court.  This is because they are brought, at least in part, under federal laws – such as Title VII of the Civil Rights Act, the Family & Medical Leave Act, Americans with Disabilities Act, etc.

The federal trial level courts in New York are divided into four “districts” – Northern, Southern, Western and Eastern.  Within each district there are multiple courthouses where trials are held.  In the Northern District of New York, for example, there are courthouses in Albany, Binghamton, Plattsburgh, Syracuse and Utica. 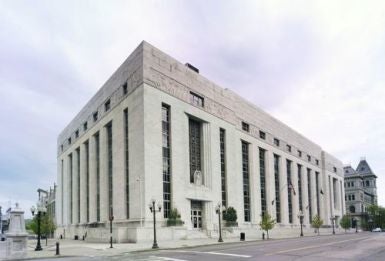 The Northern District Courthouse in Albany

Federal Court in New York has an electronic filing system, known as “ECF” (Electronic Case Filing).  Through this system everything is electronically filed, including the papers commencing a lawsuit.

Federal Court also has an online document viewing platform known as “Pacer” which is available to the public.  So, any papers that are filed through the ECF system (except those identified as confidential) are generally available through a public search on Pacer.  Once again, however, the majority of documents in a Federal lawsuit are not filed, and these generally include private medical records, financial statements (which are often relevant in employment discrimination lawsuits), deposition transcripts and settlement documents.  As with state court, there are circumstances under which these documents may become public, however generally speaking in cases of very private information steps may be taken to redact or otherwise prevent confidential information from becoming part of the public record.

There are some scenarios where privacy concerns are deemed to outweigh the right of the public to know who the parties are to a lawsuit.  These include cases involving children, where “Jane Doe” or other similar names could be used, as well as cases involving sexual crimes and abuse.  In these instances, disclosure of the victim's name is typically considered unnecessary.

It's rare to pick up the newspaper and not read, somewhere, about a lawsuit.  This is because many lawsuits are interesting, and they often involve matters of public concern.  But how do reporters find out?

Generally, reporters find out about lawsuits through one of three ways: 1) through their own search of recently filed cases in the county clerk's office or on Pacer (or, sometimes, through tips from employees in those offices); 2) from the attorney for one of the parties; or 3) from one of the parties themselves.

The first scenario makes sense – reporters have a job to do, and part of that job is to find stories.  With respect to the second and third scenarios, however, you may be asking yourself why a lawyer or a party would want to leak a case to a reporter.  There are several reasons.

One is that some lawyers are media hounds who love to see their name in the papers.  They do this without, in our opinion, sufficient consideration of what impact the media attention will have on their client's case.

But there is another, more strategic reason – which is that in some cases media attention could be helpful to a case.

The reality is that many factors must be considered before engaging the media in any case, and the number one factor is how that attention will impact the client.  Many clients want things to be kept quiet, and in this scenario, it is incumbent on the attorney to respect that wish.

One of the deterrents to lawsuits is their public nature.  Many people do not want their private problems to be made public, and this is understandable.  While steps may be taken to limit public disclosure as much as possible, in most cases a party filing a lawsuit must be aware that some information may be publicly available.  For this reason, it is critical to speak with lawyers who have experience handling lawsuits in both State and Federal court, in order to discuss the options, risks and benefits of filing a lawsuit.  If you have questions about this, give us a call.